After all the fuss and hyperbole and general excitement in the astronomy press, I finally managed to get a 5am clear sky and have a go at comet C/2012 S1 (ISON), using my newly-acquired (but about fifteen years old) Nikkor ED 300mm f/4. This lens is autofocus, so no reassuring “thunk” as the focus ring hits the infinity stop. On the other hand, it fixes focus on first-magnitude Altair!

The standard for this session was six frames of 60 seconds for all shots. I also took a set of dark frames, flat frames and bias frames, and had a play with the processing suite PixInsight, which I’ve downloaded for a 45-day trial. More of that later. 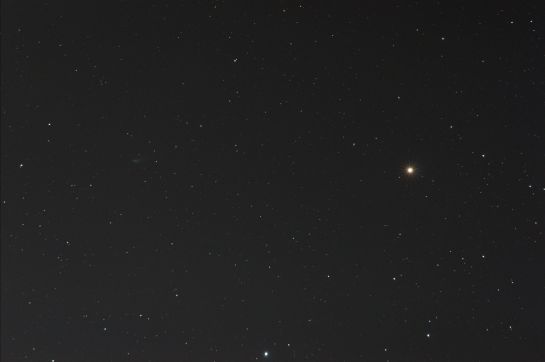 ISON is in Leo, next to Mars, and still invisible to the naked eye. I couldn’t resist a little cheer when I saw this in the camera display. The stars are trailed because the six frames are stacked by aligning on the comet.

Most pictures benefit from a little cropping, and this is no exception.

Still in Leo, Comet 2P/Encke is a few degrees to the north.

Comet C/2012 X1 (LINEAR) is only a few degrees away too, in the constellation Coma Berenices.