The solar eclipse of Friday 20th March 2015 presented a real dilemma: as an enthusiastic and committed member of the Eddington Astronomical Society, I wanted to be part of the event organised in Kendal, but as an individual amateur astronomer/astrophotographer, I wanted to see (and film) the eclipse.  Kendal was forecast to be under cloudy skies, but a couple of hours drive would take me away from all my EAS colleagues, two radio stations and 500 enthusiastic members of the public, beyond the edge of the cloud layer to full sunshine.

After much soul-searching the night before, I set the alarm for 4.30am.  The first job was to check the forecast again – yes Kendal was still going to be cloudy, but Oswestry (about half an hour south of Chester) would be clear.  Self interest won the battle, so after a quick coffee and a final kit check, I hit the road.

This was my intended destination, from Google Maps.  I liked the look of the car park at bottom right, with unimpeded views over the golf course.

I arrived in good time to go and say Hi to the staff at Little Chef, use their facilities and buy a Cappuccino, then on with setting up the rig.  The AZ-EQ6 mount will take two scopes in Alt-Az mode, so I had rehearsed a configuration with the Altair Wave 115 carrying the Nikon D90 on one side, and the Skywatcher Evostar 102 with a 15mm eyepiece on the other.  A triple thickness of Zoltan Trenovski’s business card was needed as a shim to align the tubes just right. 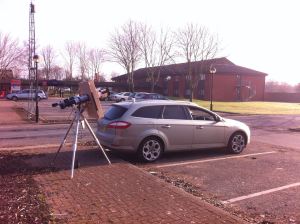 A couple of test frames to check the focus and the exposure: 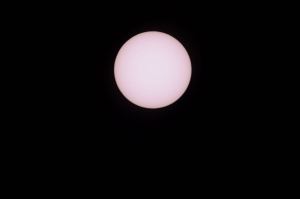 At six frames per minute, within 10 minutes there’s a clear view of the eclipse starting.

After 864 frames and a weekend of aligning and processing, we have half a minute of time-lapse video 🙂

There’s lots more to be said here – other people had had the same idea and we spent time comparing notes, the wonderful manager of Burger King / Little Chef kept bringing me free coffee and letting her staff come out to take a look through the telescope, everyone who used the carpark came to have a chat, and of course someone had brought a colander… 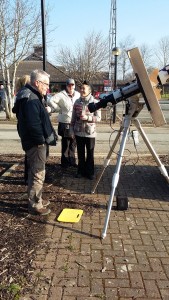 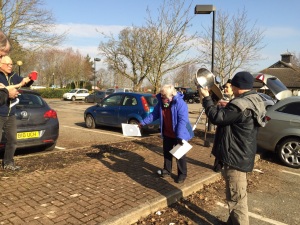 Spotting scope and a beautiful Televue both with solar filters.

I hope that some of the wonderful characters gathered in the carpark that morning will manage to get in touch and send their photos to simon.white@simoninthelakes.co.uk so that I can display them here.  I’ll update this post with anything they wish to add.

One thought on “The dilemma of self-interest -v- public outreach on eclipse day!”