Over the first few days of May, comet C/2012 K1 (PANSTARRS) flew past galaxy M51 (The “Whirlpool” Galaxy).  On the night of 2 May, I was out on the Tebay Road until the very late early hours of 3 May, making just about every mistake in the book as I tried to assemble a three-frame mosaic of the flyby.

I could have got the whole picture in the frame of my 300mm lens, but decided to take three adjacent frames through the telescope, the equivalent of an 805mm lens.  The idea was to take the three frames, 20 exposures of one minute for each frame, and stitch the results together to make one 36-megapixel photo with a total exposure of about an hour.

It was an ambitious project, and getting it completely wrong taught me a load of new lessons about the scope, my method and all that complicated stuff about knowing your left from your right… 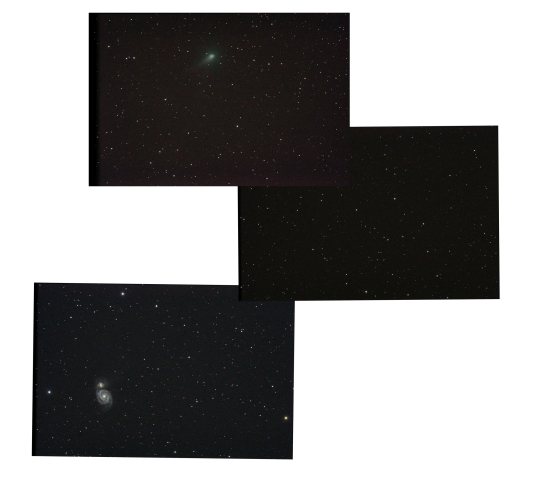 You get the idea, don’t you?  Always stick to the plan, because recalculating at 2am with a notepad and a red torch when half your frames have been spoiled by clouds and the rest ruined by a succession of schoolboy errors, can only lead to misery.

Fortunately I had also programmed a remote scope with iTelescope.net under the New Mexico skies, so I had plenty of processing to play with over the weekend. 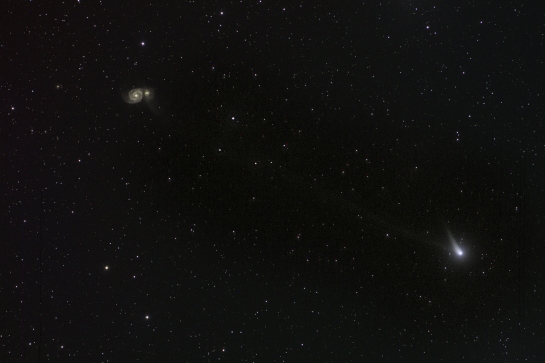 Now that’s what I call a flyby!

If you fancy a go at processing this image yourself, please feel free to copy the original calibrated frames from DropBox here.