A text message from Stuart Atkinson alerted me to look at the forecast for the night of 26 April, and at half past ten that night we drove out to the Tebay Road under partly cloudy skies.  As forecast, they cleared and we managed a good four hours of observing and astrophotography.  Stuart has written up the session here, so I’ll stick to my photos.

First up, of course, the new standard photo of Comet C/2012 K1 which was almost exactly at zenith (directly overhead) at midnight.

Then right next door, also at the zenith, the Pinwheel Galaxy M101.

Then I took the camera off, popped in an eyepiece and just had fun looking at stars, star clusters, galaxies, planets, minor planets and all the other stuff that’s in the sky.  Much of the time we were just gazing without the telescopes. Happy times!

Here’s Stuart’s great shot of my scope set up behind the car against a wonderful sky. 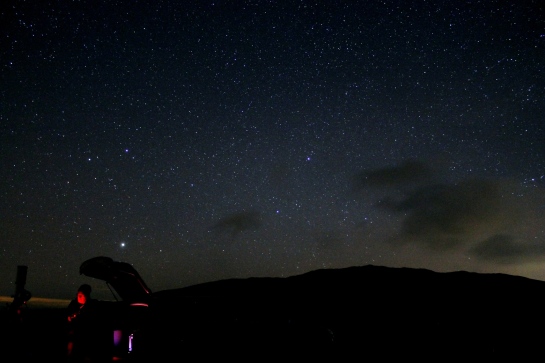 Aaahhhh… late April in Cumbria!  Sunny days turn into clear nights, and we had two in a row for a change.

On 19 April, I returned to an old favourite location at the top of the Shap Road.  Like the previous night, my first target was the comet C/2012 K1, which I will try and capture at each session with identical exposure and processing in order to observe the comet’s development.  It was a windy evening high on the Shap Road, with the electricity pylons and their cables making some strange wailing sounds. 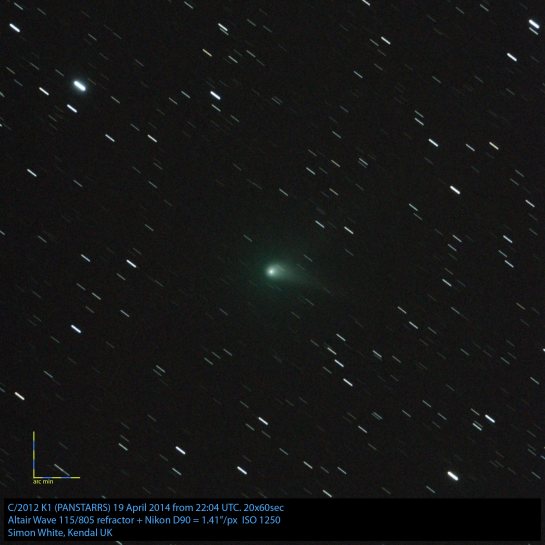 Job done on the comet, now I can relax and tackle a couple of other targets.

First, the Whirlpool galaxy M51, an iconic feature of the northern night sky and one of the “must have” shots in any astrophotographer’s portfolio.  I’ve seen it many times in books, magazines and online but believe me, the first time you take this yourself is a very special moment.  It is a faint object, at magnitude 8.4 it is way beyond naked-eye visibility, and individual frames show very little even at 60 seconds exposure.  But when it emerges from the processing software…

Then another iconic target, this time quite low over the southern horizon towards Kendal, the Sombrero galaxy M104.  Another WOW! moment when this comes up on my processing screen.

On 18 April, I drove out to a new location near Tebay to the east of Kendal, in search of higher altitude and darker skies.  I had been keen to try this spot for some time, and conditions were just right.  With reasonable elevation above sea level, and hills providing shelter from the lights of the only nearby town, it was as good as expected.

My first objective was the comet C/2012 K1 (PANSTARRS) which has been exciting the astronomy community.  I have been very keen to get the new kit up and running in order to join the amateur and professional astronomers contributing observations, photographs and measurement data for this comet. 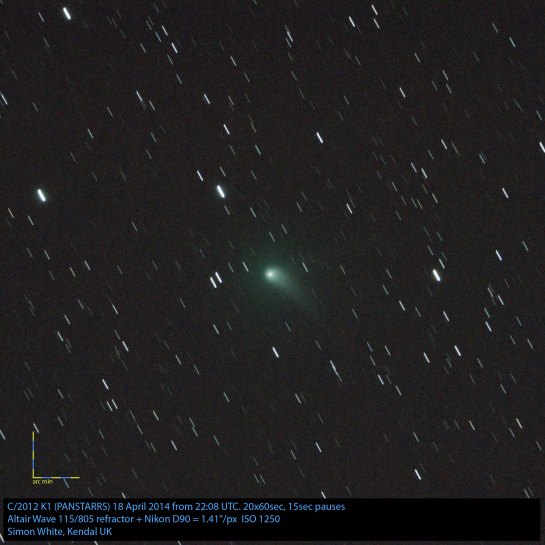 I could not be more pleased with this, my first serious contribution.  You can see that I have added a Photoshop layer of information, showing the angular scale of the capture and various technical details.  This and others in the same vein will be part of my regular submissions to CIOC, the NASA-sponsored collaboration between professional and amateur astronomers which has evolved from the earlier collaboration prompted by observations of Comet ISON.

Once the comet is in the bag, I have to catch another target to exercise my processing skills.  This time I choose a globular cluster in the constellation of Hercules, catalogued as M13.  This cluster measures about 145 light years across, is about 25,000 light years away, and contains hundreds of thousands of stars. 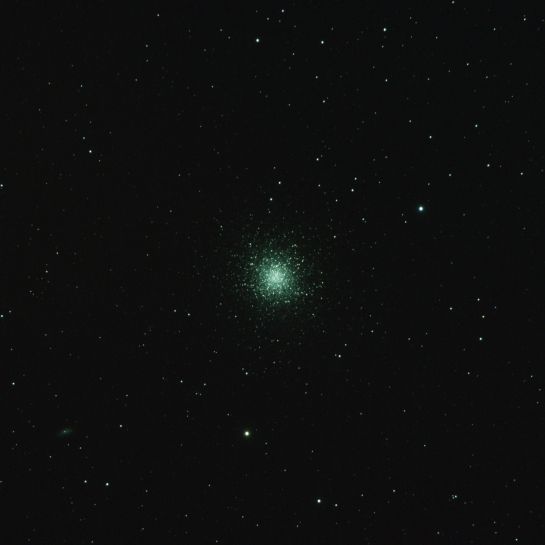 I had known there would only be a short gap between the end of dusk (where the Sun is 18º below the horizon) at 22:47 and Moonrise at 00:12 and, sure enough, about half an hour later the Moon hoves into view over the hills in the East and brings the session to a close. 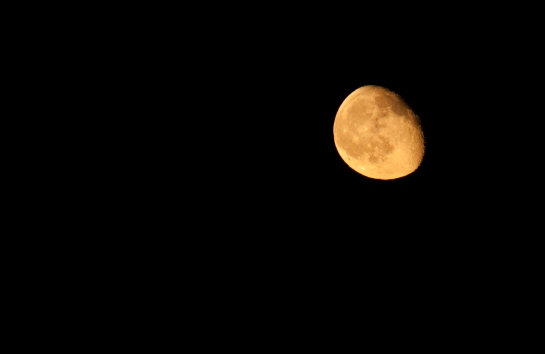 2014 has been the year of the kit upgrade.  It has been in my mind for some time, and I’ve finally taken the plunge.

My basic setup is now an Altair Wave 115mm ED triplet refractor, mounted on a Skywatcher AZ EQ6-GT.  The telescope adapter means I can still attach my Nikon D90, so I’ll be sticking to that for the time being.  I will write up my experiences of the kit once I’ve got the hang of it – there’s so much to learn about using a telescope as an 805mm f/7 telephoto lens, and the computerised mount is really something special.  The whole lot weighs a ton, so it’s most definitely an out-of-the-back-of-the-car activity.

First night, 17 April, in a brief opportunity in my moderately light polluted back yard, I could put the kit through its paces.  M81 and M82 had been a recent target for the supernova, so I pointed there for comparison and took just four frames of a minute each.  Stacked and processed in PixInsight, this uncropped photo shows exactly what’s in the viewfinder. 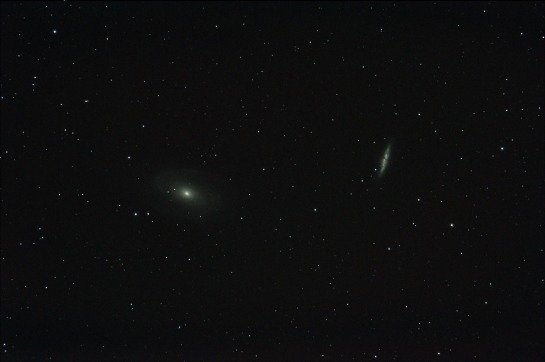 On Tuesday evening 1 April the forecast looked pretty good.  As I packed the car in an optimistic mood for another go at the constellation of Leo, I glanced towards the west and saw the thin crescent Moon about 90 minutes from the horizon.  All plans changed, and I headed out to Helsington church, south-west of Kendal, with good views to the hills of the Lake District on the western horizon.

The Moon looked okay through the new combination of Nikon D90 and Altair Wave 115/805 ED Triplet (hereafter “my telescope”), but only okay.  The humidity was higher than expected, as was the wind speed, and the atmosphere low to the horizon was not going to cooperate.

This was about the best on offer:

Of course this location and composition are one of my favourite combinations, so I switched to the 300mm lens as the Moon approached the horizon.  ISO 800 with the lens wide open at f/4, this is the series of 30-second exposures as the Moon set behind the skyline of the National Park: 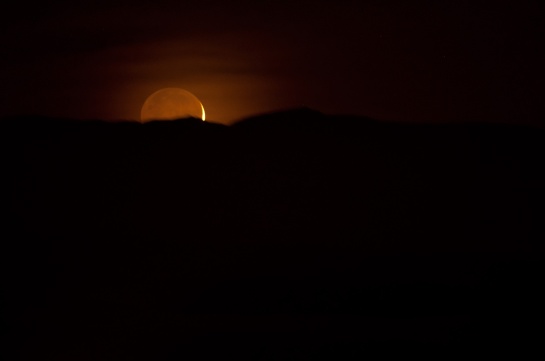 I stopped the mount motor to take one frame with the horizon stationary, which shows how much the Moon was moving over the 30 seconds:

Clipping that horizon in Photoshop, I can use it to take the blur out of the earlier shots. I’ll leave it to you to decide whether this is an improvement. 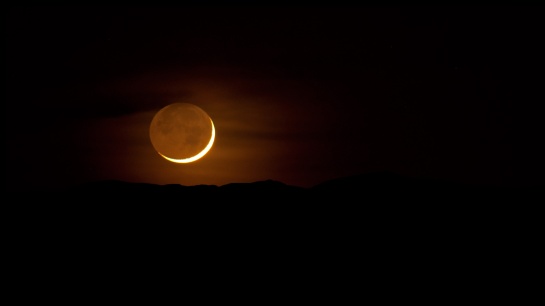