A quick outing last night to catch PANSTARRS through a gap in the clouds. 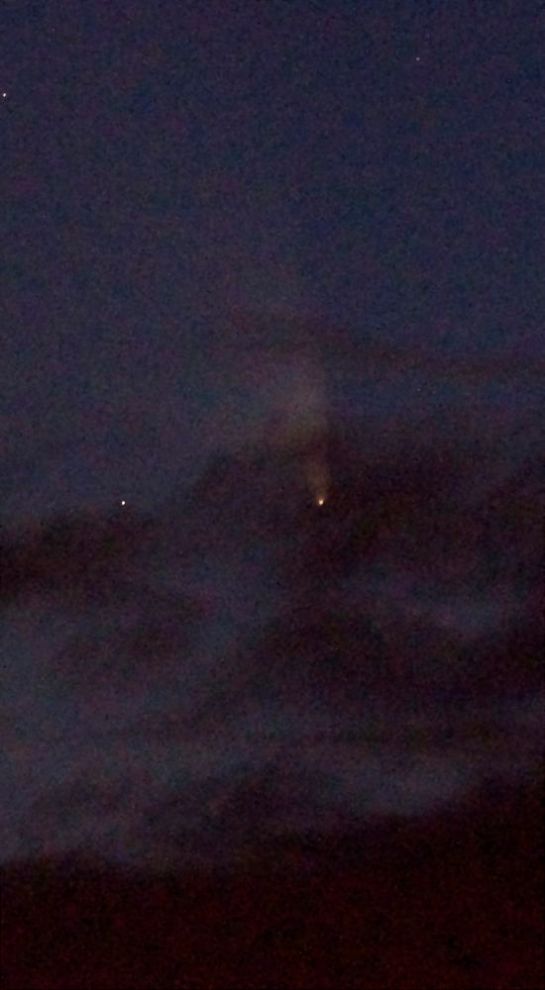 300mm from a fixed tripod will produce short star trails very quickly, so I used the EQ3-2 mount, RA driven.  It only needs a vague polar alignment for this – as the latitude is already set, I just place the tripod with the RA axis pointing roughly to where I already know is North.  That’s it.  No sighting, no levelling, no adjustment.  Good enough for a few seconds at 300mm.

The unprocessed version of this video was rather disappointing. See PANSTARRS time-lapse video for details.

This version of my same video has been reprocessed in Photoshop to boost the exposure by two stops. It’s crude, but shows how much better that choice of setting would have been. I have also taken the opportunity to sharpen the frames a little, and crop too. The cropping accentuates the judder of the movement caused by taking a two-second exposure every five seconds – and processing to play at 15 frames per second.

Fred Espinak’s video of PANSTARRS with the Moon is just stunning.  Arizona does have wonderful skies.  Cloudy skies in the North-West of England are very frustrating, but I live here by choice, so shouldn’t grumble.  On the other hand, it would be nice to have another go at this comet before it fades away.

The frames for this video were taken at Eddington Astronomical Society’s “Comet Watch” public event on Wednesday, 13th March 2013.  A clear but cold evening found us at Kendal Castle with a crowd of up to a hundred members of the public, who joined us in looking through telescopes, binoculars and cameras to enjoy the spectacle.

Comet PANSTARRS sets on the western horizon from Kendal Castle.

I’m not terribly happy with this one.  It would be easy to blame the distractions of the crowd, people wanting to have a look, ask questions, offer opinions, but I welcome all of those interactions so they can’t be to blame.

I should have realised how much the sky would darken as the comet aproached the horizon in the fading twilight, so a brighter exposure – anticipating the final conditions – would have been better.  That comes down to lack of experience, so lessons learned and I’ll have another go as soon as the sky is clear again.