6am, Tuesday 21 December 2010, I arrive on Scout Scar.  Minus 15 degrees might have been optimistic.  Camera, lenses, tripod, everything I can wear, plus a flask of hot ribena. All you need to know about when and where to see an eclipse is available from the Mr Eclipse website maintained by Fred Espinak.  I am deeply indebted (as many amateur astronomers must be) to Mr Espinak for the solid, reliable information that he chooses to share with anyone who cares to go and look.  Here are the details he provided for the 21 December 2010 lunar eclipse.  Totality will be at sunrise in Cumbria, which means the Moon will disappear into shadow and into light at the same time. 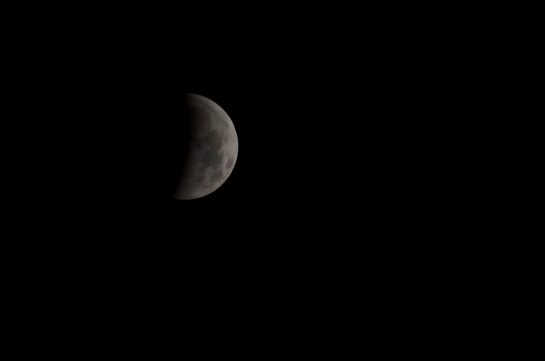 At 7.02, the Earth’s shadow is obscuring half the Moon.  Despite the rehearsal, I cannot find reliable focus at 1000mm, so have to be content with 500mm. 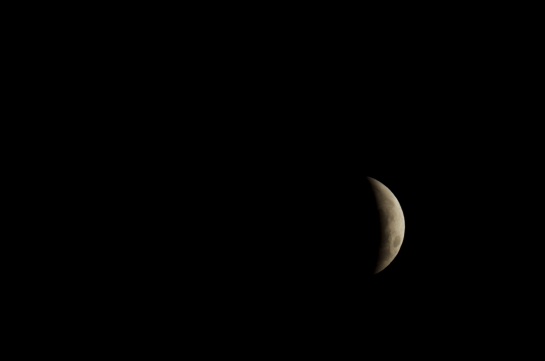 As the Earth’s shadow moves across the lunar surface, the remaining illuminated area moves into penumbra – partial shadow – and the exposure has to be increased to compensate.  Here the exposure is around ten times the previous photo. 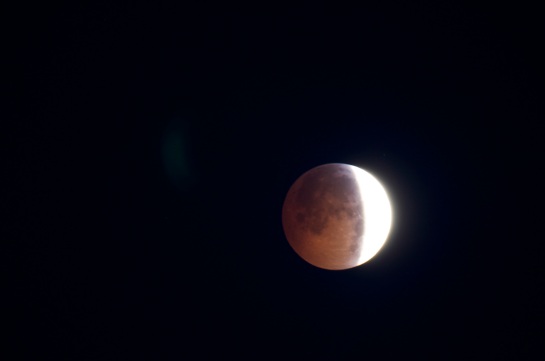 A further increase, this time by a factor of 120, reveals the shadowed part to be illuminated by light that has passed through the Earth’s atmosphere, giving the Moon a red glow. 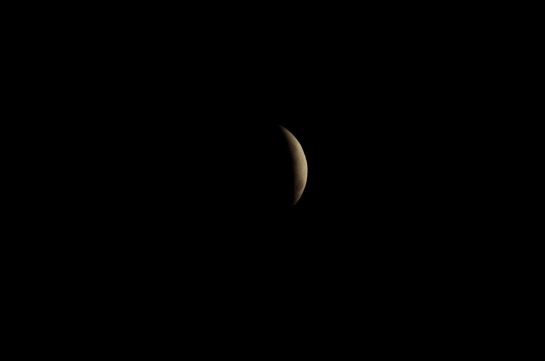 Approaching totality, the last sliver of illuminated surface is in penumbra and a further increase in exposure is required. 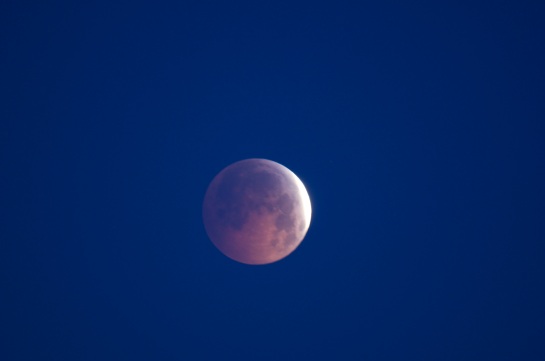 As the eclipse becomes total, the Sun is rising behind me.  The sky is getting lighter and the image is becoming flat, showing almost no contrast. With the extreme cold, the flat, dim lighting and the awkwardness of focusing the 500mm lens, I have enjoyed watching the eclipse more than I have enjoyed photographing it, to be honest. However… 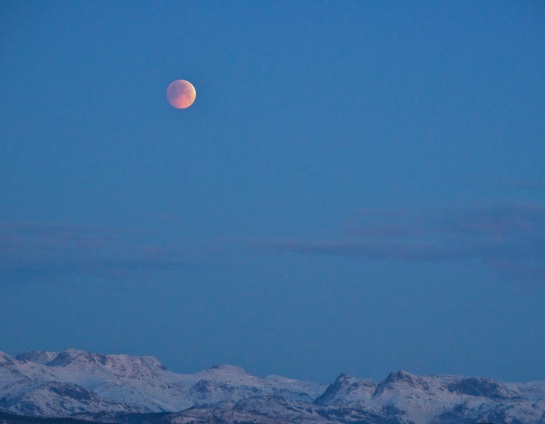 … almost as a last resort, I switch to the Nikon 18-200mm zoom lens (and switch the D90 to “Auto”) in the hope of capturing something of the context for this morning’s efforts.  Once again, the D90 does exactly what I ask of it, and “Total lunar eclipse over the Langdales” has become one of my favourite shots of the Moon.  Just a tiny warm up and a little extra saturation in Photoshop.

Less than 24 hours to go and I’m on Scout Scar, checking conditions for the eclipse the next morning.  Under a full moon, the “Mushroom” is as bright as day – only Orion in the background betrays that it is 9pm in December. 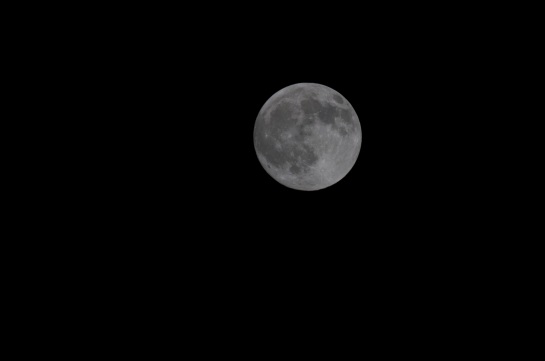 The Moon looks good through a Nikkor 500mm reflex telephoto, but this lens does not have a “hard stop” when focused at infinity, so focus adjustment is by eye.  As this involves rotating the full barrel of the lens, it is very trying.  There is no easy fine-tuning, and the aperture is fixed at f/8, so there’s no stopping down for depth of field.

The most productive option is to use the “Live View” display on the D90, which can be zoomed and panned while focusing.  That can’t be done while wearing gloves, however, and it’s already well below zero.  Tomorrow morning is forecast to be minus 15. 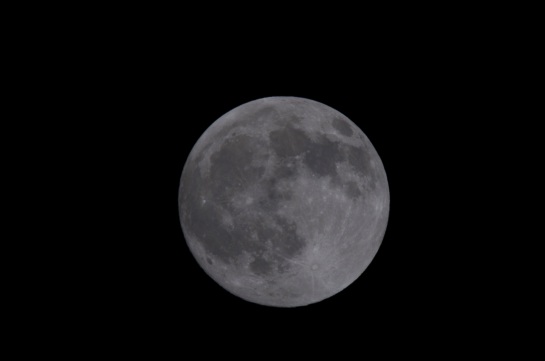 With the Sigma 2x converter, the lens doubles up to a 1000mm f/16.  Focusing difficulty doubles up too.  I’m never really sure whether it’s in focus at 1000mm.  Perhaps the image is slightly soft, even when in sharp focus.

Contrary to expectations, the Moon isn’t an inspiring subject when full.  The light is just flat and there’s no detail.

This was the first night out with my Nikon D90 – and its remarkable 18-200mm lens – in December 2010.  I wanted to get a feel for how it would handle at night time, as I was planning to capture the total lunar eclipse coming along in a few days.  Almost a full moon, snow-covered ground and clear skies.  For a newcomer to digital SLR, the functionality of the D90 just blew me away.  Even by moonlight, the D90’s autofocus worked like lightning. 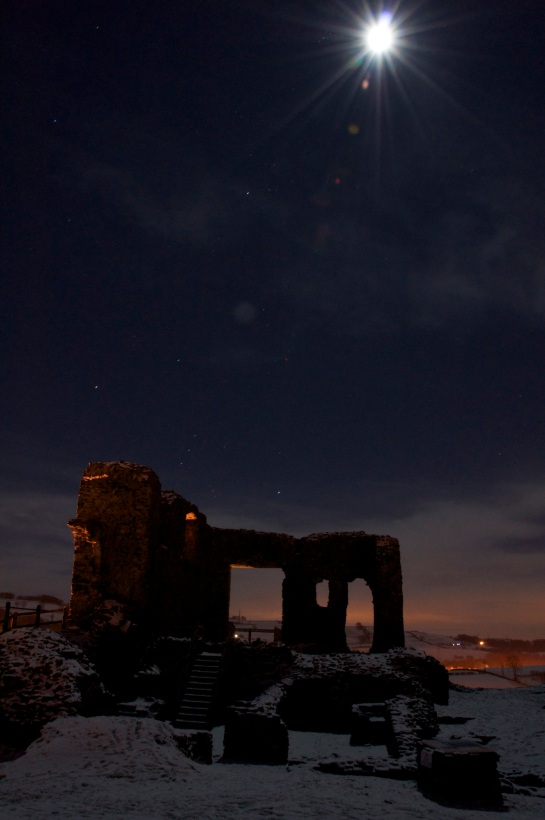 A quick capture of Orion rising behind Kendal Castle.  18mm, 30 seconds exposure and the star trails are just noticeable when viewed at full size (much more on that to come later). 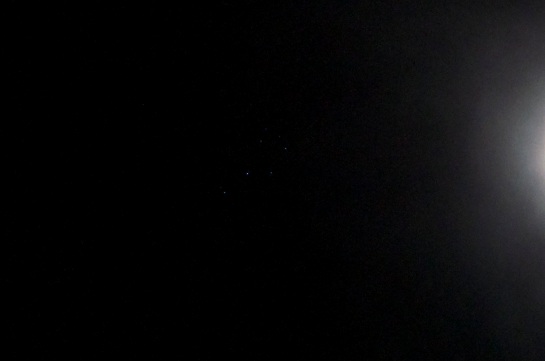 An audacious shot direct into the Moon, cropped to show the Pleiades.  Not quite astrophotography, but the possibilities are starting to show themselves.